This entry, originally January 22, 2014,  breaks the strict chronological arrangement I had been following, but nonetheless is worth posting now. We will be back with convict Jacob  and his son William before too long.

You will recall that the slightly mysterious Jacob – horse thief, apparently – arrived involuntarily in 1822.  He was briefly in Hyde Park Barracks – in fact it was there that some years ago now I first encountered his name listed on their database. 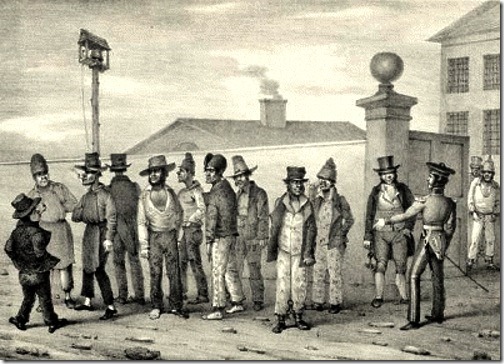 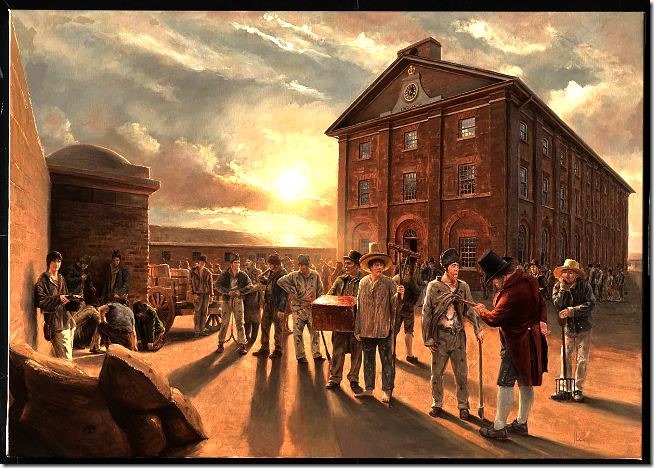 But the true progenitor of my tribe seems to have been his boy William, who arrived at 14 on the immigrant ship Thames out of Cork via Brazil and Cape Horn – a voyage which must have been quite horrendous, not least in terms of his losing two siblings and, some think, his mother on the way. 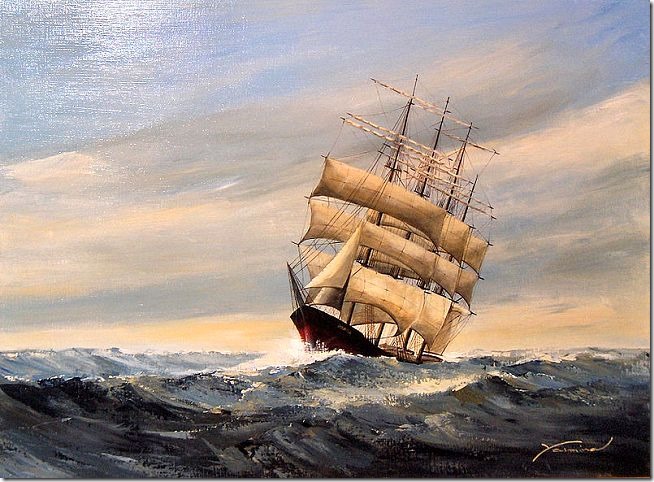 The “Pamir” was the last commercial sailing ship to take the Cape Horn route – in 1949!

From William and Caroline’s 14 children the family spread from a start in Surry Hills to Picton and Braidwood and on to places such as Shellharbour, Wollongong, Coolah, Wellington, Gunnedah and heaven knows where! I am still not absolutely sure whether Picton or Braidwood came first, or whether they were overlapping.  I did meet a number of the Picton Whitfields but have never been to Braidwood! I did however hear tales about Braidwood, and Araluen, and other places between the South Coast of NSW and Monaro.

I was interested to find this on the Millpond Farm site.

Australia’s Millpond Farm is located at Jembaicumbene, 10kms south of the New South Wales Southern Tablelands village of Braidwood. The property has a rich colonial history, and over the past two centuries has produced prize winning wheat, sheep & cattle. Gold was discovered at Jembaicumbene in 1851 and a variety of important historic gold mining sites and 19th century buildings survive  within our spectacular natural wetland in the middle Jembaicumbene valley. 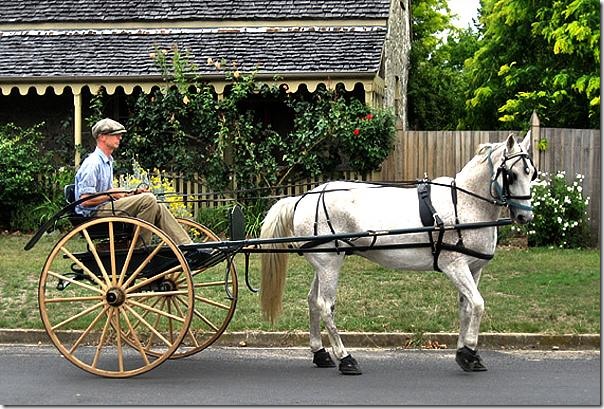 My personal town sulky for the past three years, this was recovered from the original owner’s farm and restored by us three years ago. It is a beautifully balanced full size long tray sulky with dated axles, and has had new axle stubs and boxes, new Amish hickory wheels with iron tyres, new shafts, all new wood in Kauri pine, all original iron with reset springs, brass fittings and leather upholstery. Painted dark green with black, white and red fine lining, it is fitted with lamp irons, wingboards, stitched leather apron and boot. Very correct with every nut and bolt replaced using square nuts and all the right clips and straps. Stamped WW on many iron parts for William Whitfield, a Braidwood blacksmith shop operating 1860s to 1940s.

Seems a few in the family were highly skilled in trades such as this. My own father was originally a carpenter, and not a mere wood butcher either. I have a memory of seeing the metal tyres fitted to a cart wheel at Picton some time, but I was very young…

The Braidwood district was discovered by the European community in 1822. Dr Thomas Braidwood Wilson (1792 – 1843), a highly respected pioneer of this district, gave his name to the town. A Surgeon Superintendent of convicts transported by the Royal Navy, Dr Braidwood Wilson was a humanitarian and during his several voyages, tried to teach all to read and write.

Cattle and sheep properties developed in the area in the 1820s and 1830s. In the 1850s, Braidwood’s population exploded as “gold fever” hit the surrounding region; but, as the gold ran out, the numbers declined and today, Braidwood is listed by the National Trust as an historic town with a population of 1,100.

Nineteenth century architecture dominates the undulating townscape, from workmen’s cottages to the larger public buildings. Preservation and restoration are encouraged by the local council and guided by the NSW Heritage Council.
Many of the beautiful early Australian buildings have been restored to their early glory, and now house a variety of businesses, hotels, galleries and sophisticated eating houses. Many writers, quilters, potters and ceramicists call Braidwood home.
The National Theatre Community Centre in Wallace Street, Braidwood, is thought to be the oldest operating picture theatre in Australia. The Braidwood Visitor Information Centre is housed at the Wallace Street entrance to the National Theatre Community Centre.

Braidwood celebrates its historic past each April, at the annual Heritage Festival. Visitors are made aware of Braidwood’s diverse past, the turmoil of the gold mining era, the influence of Chinese settlers and the hardworking farmers. Locals and visitors alike are encouraged to dress in period costumes to add to the festivity of the day.

Following the discovery of gold in the Araluen Valley in 1851, the infamous bushrangers Ben Hall, the Clarke brothers and the Connell family played their part in the fascinating history of the Palerang Shire.

The Clarke Gang, also known as the “Jingera Mob”, held up stores, hotels and homesteads, and shot policemen and “special constables”. In January 1867, when the Braidwood Police found the bodies of the four “specials”, they wrapped them in bark and buried them nearby. After a few days, Premier Parkes ordered that the bodies be exhumed and brought to Braidwood. Today, a memorial to the four constables can be seen in the Braidwood Cemetery.

Having survived those wild days, Braidwood is now listed by the National Trust. The beautiful buildings from the second half of the 1810s form Braidwood’s historical streets cape and interesting original settlers’ cottages can be found in the lanes and in the outlying villages.

The old gold mining village of Majors Creek now plays host to “Music at the Creek”, held on the first weekend in November. And, while in the vicinity of Nerriga, the adventurous can thrill to the excitement of white-water rafting.

Visitors now enjoy horse riding, bush walking and scenic drives through the very same countryside that was once frequented by the wild colonial boys of bygone days.

You can learn every historical fact there is to know about the local area at the excellent Braidwood museum, which resides in a lovely old stone building opposite the pleasant tree-filled park.

The collection includes over 2100 artefacts and 900 photographs of local origin. A unique attraction is the Nomchong collection consisting of items from the Nomchong family (Chinese traders in the town from the 1870s …).

A visit to Wollongong Library today has resolved some of my questions. You may recall the post Family history–some news on the Whitfield front.

The cousin who wrote to me wanted to point out that Bob Starling   — referred to in my page at the head of this entry — also has not got everything perfectly correct. Here is that cousin, the granddaughter of Susan Caroline Whitfield: 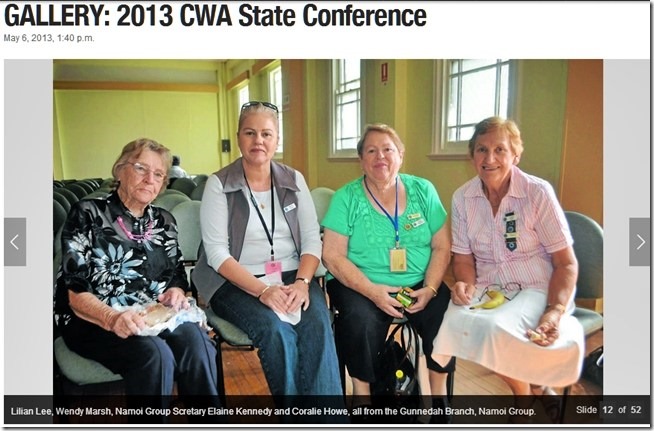 She is the one on the left and she is over 90 years old. As she gave her phone number I rang her last night and she sounded fantastic – as bright as a button. She could recall my father as a blonde god of a lifesaver at Shellharbour in the early 1930s!

She referred me to Australian biographical and genealogical record series 1, 1788-1841, with series 2 supplement, 1842-1899 / series 1 edited by John T. Spurway, assistant editor Allison Allen; series 2 edited by Kenneth J. Cable and Jane C. Marchant. It is in Wollongong Library and I will surely check it.

Which I have now done – and for all of you here are the relevant pages:

I have long been aware of the existence of the Braidwood branch of the Whitfield clan but I don’t recall meeting any of them, nor have I travelled to Braidwood. But it is a good story, how they got there. 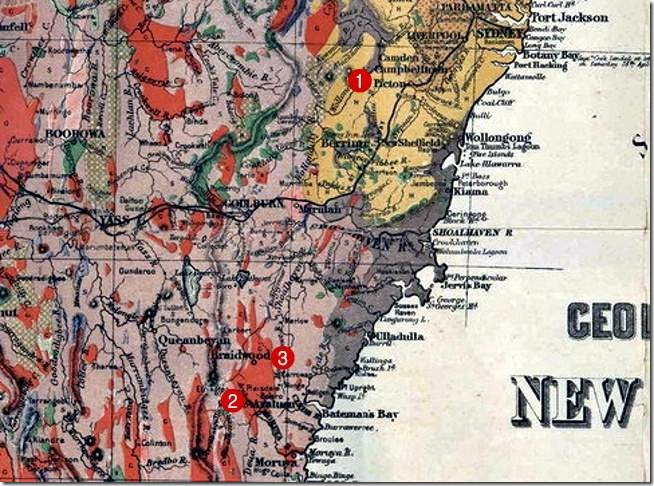 So this is about two of my father’s great-uncles, Jacob 2 and Richard Whitfield. 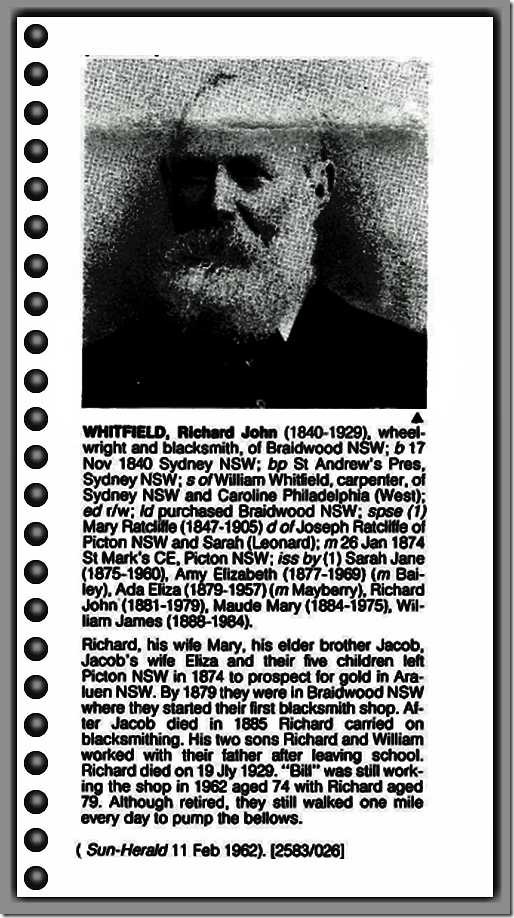 The information in Jacob 2’s entry is more evocative: “Jacob was farming in the Picton district of NSW until 1875 when with his wife, Eliza and five children, his brother Richard, his wife, and other family members, he left Picton to walk to Araluen NSW to the gold fields. They took with them a cow and horse and cart with their belongings. After three years in Araluen they went to Braidwood NSW where they set up their first blacksmith shop in 1879. Jacob died six years later on 22 Oct 1885…” His wife became a midwife in the district.

By the way my great-grandfather William Joseph John Whitfield, who stayed in the Picton district, and his brothers Jacob and Richard all married sisters from the Ratcliffe (Radcliffe) family, respectively Elizabeth, Eliza, and Mary Ann…. 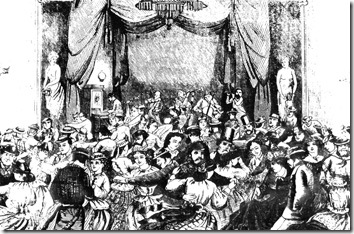 And then there is Braidwood and tales I partly remember. Dad mentioned Quong Tart and the Nomchongs more than once. 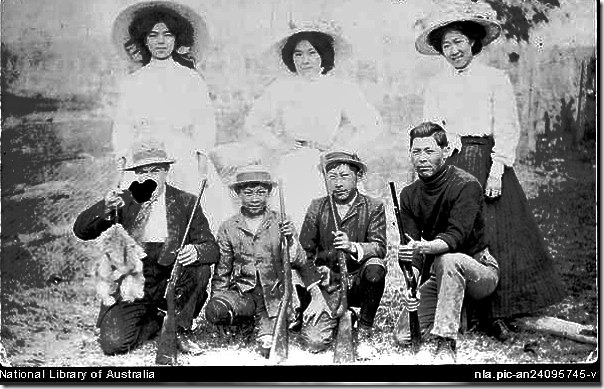 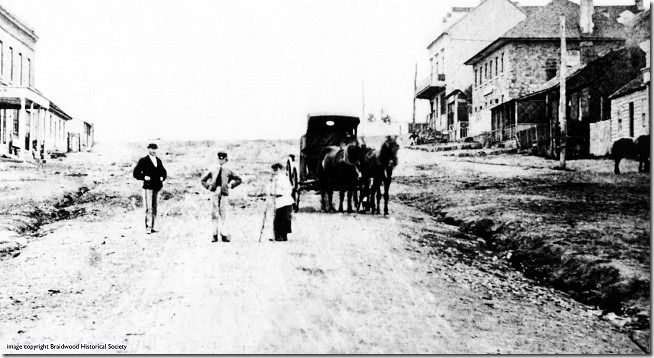 More at Stray stories of family and Australiana — 2. That entry was one of a 2014 series leading up to Australia Day. So it is with this series. More on that later.

In the next post I mention the three Ratcliffe (Radcliffe) sisters who married three Whitfield brothers – one each of course – including my great-grandmother Elizabeth. I referred you to my 25 January 2014 post — yesterday here — for more information. There you can read much about the first Ratcliffe in Australia, Joseph:

From the Indent for the Guildford 1824: Joseph Ratcliffe was tried in Suffolk in March 1823. He received a sentence of Life. He was a Brickman and Ploughman at this time. His native place is also stated to be Suffolk. He was 26 , had a brown and freckled complexion, brown hair and dark brown eyes and was a tad over 5 feet 3 inches tall. My research shows that Joseph was recommended for a Conditional Pardon in 31 January 1839 and was approved in July 1839. In 1837 Joseph received permission to marry Sarah Leonard who was 17 and born in the colony. Joseph at this stage was in receipt of a Ticket of Leave (No.32/611). They applied through the Rev. Hassall at Narellan.

And here he is, thanks to WikiTree. 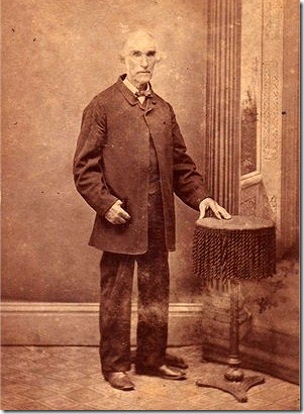 One of my great-great-grandfathers, Joseph Ratcliffe

Now to Jacob 2, one of the Whitfield brothers who went to Araluen then Braidwood from 1875, a story to be told in the next post. This is a reminder of how things were back then: Goulburn Evening Penny Post 29 October 1885. 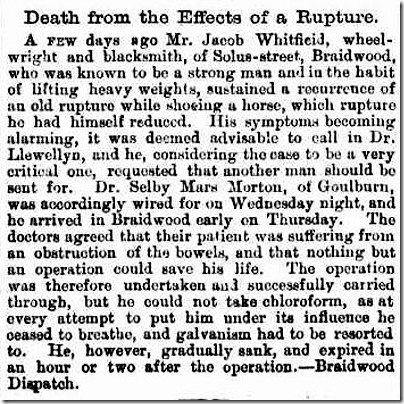 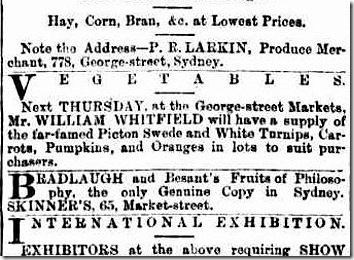