I have had a good look round on the net and have now seen quite a few of Henson’s images, including all those currently on the Roslyn Oxley Gallery site. Not there but elsewhere I did find one that I personally would regard as pornographic, but there are a number that push the edge. I do prefer photography that is less self-consciously “arty”, I must say, but that is a matter of personal taste. I still can’t imagine hordes of pedophiles seeking them out to get their jollies, not when so much more obvious sources are available… I do not consider any of the images below pornographic, I hasten to add, or they would not be here!

Also worth a look: The Stir Over Bill Henson’s Nudes — Paul Sunstone, from Front Range of the Rockies, near Cheyenne Mountain.

Judy Annear – senior curator of photography at the Art Gallery of New South Wales, which has hosted Henson’s work in the past – agrees.

“His work, in my opinion and in the opinion of my colleagues, … is [that it is] unfortunate if people confuse it with pornography,” she said.

But Hetty Johnston, from anti-child abuse group Bravehearts, wants police to lay charges against the owners of Sydney’s Roslyn Oxley9 gallery and Henson.

“It’s child pornography by any name you want to call it,” she said.

“At the end of the day, these are images of naked young girls – that’s illegal and it’s inappropriate.”

Prime Minister Kevin Rudd says there is no artistic merit to the photos.

See also Charges ‘likely’ over naked teen shots. The photos have been seized as evidence by police.

I haven’t seen them, of course, aside from what is in the news.

But if you have wings it seems much can be forgiven. 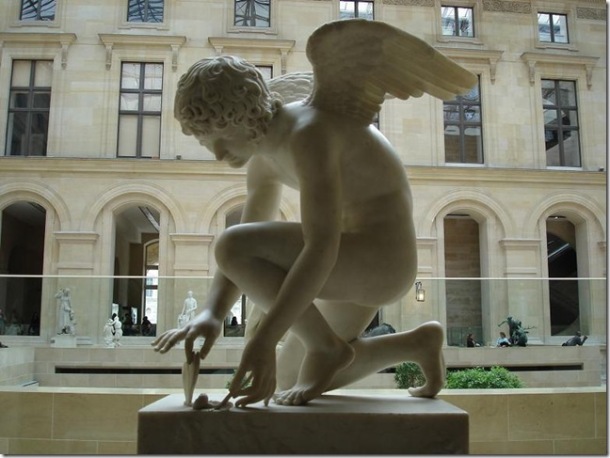 Even without wings, it seems its OK as long as it is kind of old; mind you the cloth probably saves it…

In a cathedral in Finland anything goes, it seems: 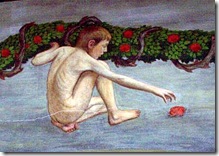 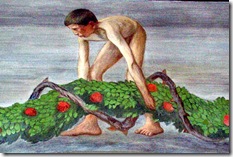 Then being a statue seems pretty much OK:

Or being painted by Gaugin:

Beats me. What do I know about art, mate? Mind you, that Breton boy doesn’t look too well to me…

That Bill Henson/Roslyn Oxley9 story just goes on and on: Gallery under angry siege.

THE owner of the Sydney art gallery at the centre of a storm over photographs of naked teenagers was holed up inside it yesterday after receiving violent threats.

Messages left on the answering machine at the Roslyn Oxley9 Gallery in the inner-city suburb of Paddington threatened to “burn the building down”.

The seized photos depicted boys and girls, some as young as 12, naked in dark, moody photographs.

They could sell tickets for this farce, remarks Sydney Morning Herald commentator David Marr. If one is rightly concerned, of course, about the excessive sexualisation of children or people under 16, one could look at the fashion and advertising industries and “tweenie” mags like Dolly for more pervasive and influential phenomena on those lines.

However, back to art, photography and the Victorians especially.

We all know about Lewis Carroll. 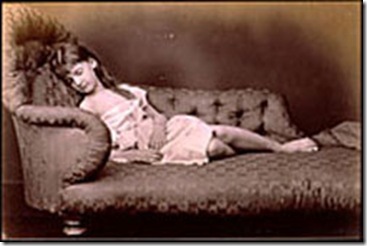 I hadn’t heard of another eminent Victorian photographer, Julia Margaret Cameron 1815 – 1879, until doing a little research for this post:

Perhaps the suggestion of piety makes that OK…

Then I found another photographic exhibition that passed without controversy in July-September 2007 under the very noses of Rudd and Nelson (not to mention Howard) in the Canberra suburb of Manuka.

Photographing children and young people is contentious. Although the images of nineteenth century photographers Julia Margaret Cameron and Lewis Carroll may not have been controversial in their time, judged by today’s community standards they would certainly have attracted controversy.

Bill Henson, Polixeni Papapetrou and Anne Ferran are among contemporary Australian photographers who have challenged notions of what is acceptable in the depiction of young subjects…

Angela Tarlinton … has given us 18 beautiful black and white images of small town boys ‘… hovering between two worlds, with one foot in childhood they are drawn into the uncertainty of adulthood.’ Tarlinton’s boys are familiar, occupying the outdoor settings they inhabit as a matter of custom. Some appear defiant, others wistful. While their deep reflection seems genuine, I suspect it is more likely to reflect the directorial skills of the artist than the psychological state of her subjects. Tarlinton’s boys are real, and they clearly aren’t wimps.

Angela Tarlinton was born in Queanbeyan and now lives at Tathra on the NSW South Coast. Her work is in public and private collections in Australia and overseas. PhotoAccess is very pleased to present this sensitive, beautiful work by Angela Tarlinton in the HUW DAVIES GALLERY: 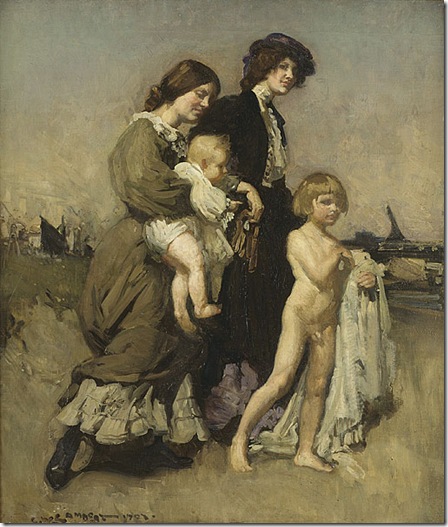 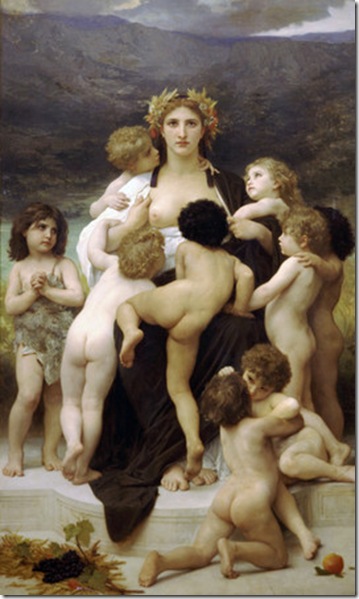 This incredible artist works in silicon to create hyper-realistic sculptures that are incredibly expressive and with a clever play on scale. This Australian artist started his career creating puppets for children’s shows, including the Jim Henson “Sesame Street.” Mueck began pursuing his art fulltime just over a decade ago. — See link from picture.

This is the final one in a set of four challenging the wowserism that has emerged lately in Australia emanating from some who should better understand the difference between art and pornography. It is ironic that our Prime Minister Kevin Rudd has turned out to be such a person.

The connection between any of these works, enjoyment of these works, and child abuse in real life is very tenuous indeed. If any are offended by them, I am sorry you find beautiful things offensive.

In searching for these images on Google I encountered, as you would expect, many images that were pornographic. I did not have much trouble deciding that the images I am presenting are not. Not all of the images in the series are really good art, though the majority are good enough. I will let you decide which of them are cliched and sentimental or meretricious, and which, if any, are beautiful and inspiring or even quite sublime — to use a very old-fashioned and conservative word!

Not many of the images in this series — perhaps none of them — are really disturbing, at least not to me; that of course is another element of art, indeed perhaps of the greatest art. We should keep that in mind too as we consider the work of Bill Henson — whose work, to be honest, I do find a bit too contrived. You will note there is more about him now on the VodPod. 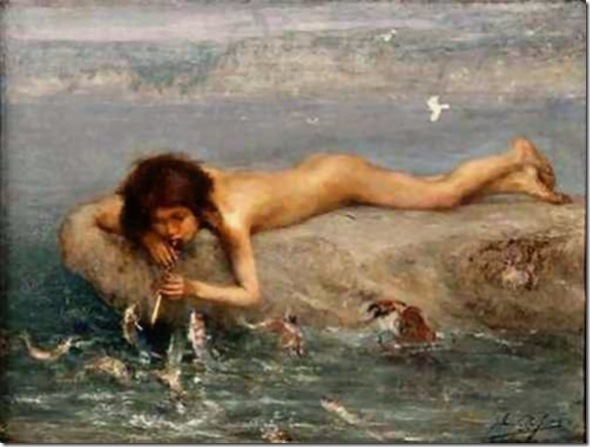 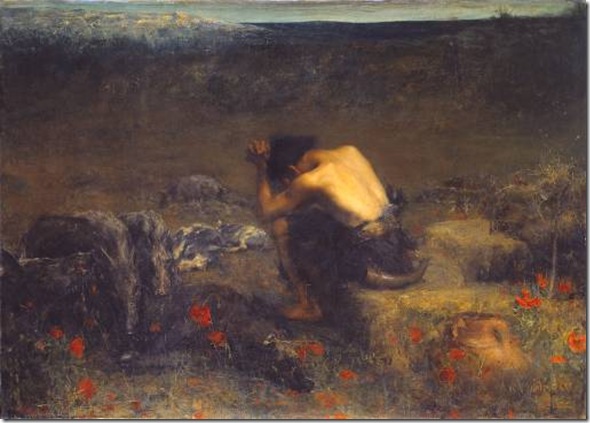 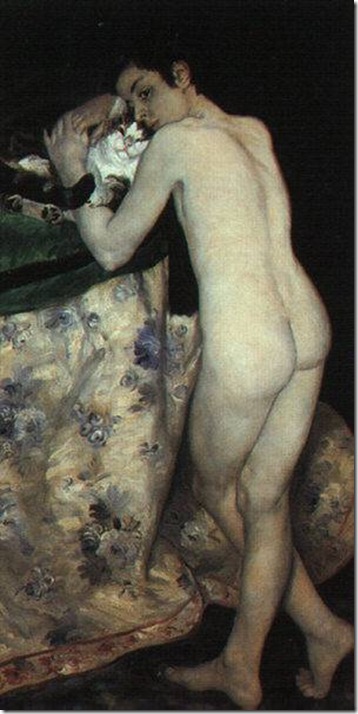 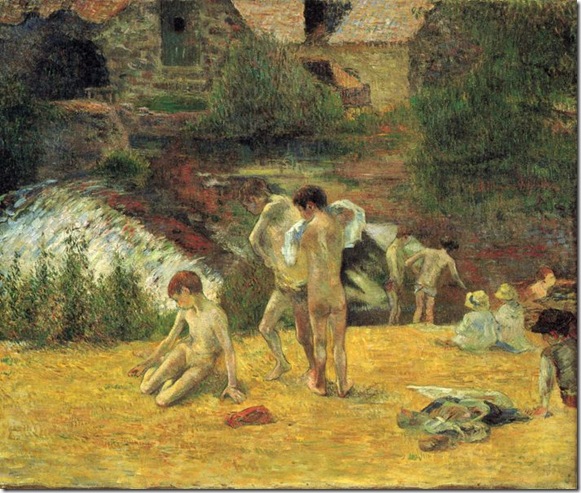 I was interested to note this from James O’Brien:

I’d arranged to meet The Other Andrew at Edgecliff Station, ahead of going to the Roslyn Oxley Gallery to see the latest Bill Henson exhibition. At the momenmt, Henson is probably Australia’s greatest art-photographer, though he invites controversy as his work often includes photographs of adolescent nudes.

I’d been to the retrospective of his work at the Art Gallery of NSW, and I’d been to an exhibition of his work at Roslyn Oxley a couple of years ago. Even then, there was a considerable debate about whether or not his work crossed the line between art and pornography. Chatting with a former colleague with a strong interest in fine art yesterday, she told me she had seen the work and thought this time around he had crossed the line.

There have been developments, speaking of Talibanesque tendencies, in the Bill Henson naked teens case. The Federal Police have decided not to proceed.

IT’S official. The picture of the naked girl that sparked the Bill Henson fuss is not pornography.

The sight of her on an invitation to the photographer’s Sydney exhibition two weeks ago provoked shock and outrage, but the Classifications Board has now declared the picture “mild” and safe for many children.

Yesterday the Herald also learned that the Director of Public Prosecutions was on the verge of advising NSW police that any prosecution of Henson was unlikely to succeed. In Canberra, Federal Police also announced that no charges would be laid over photographs in the Australian National Gallery.

Kevin Rudd is sticking to his guns, even if it is now manifest that Henson’s work is not considered in the same league at all as this vile activity.