Recent family history research has William Whitfield aged 10 on arrival in the colony, as indeed he is in the “Thames” passenger list. Also, it appears Jacob Whitfield’s first wife, Mary, was Goss not Gowrie.

I leave my maternal line, the Christisons, in Scotland as we found them in the post for 1815. After all, I strayed into the 1825 decade by noting not far from that date the birth of my great-great-grandfather David Hampton Christison.

Jacob Whitfield, my great-great-great-grandfather, left Cork, Ireland on the convict ship “Isabella 1” in November 1821 and arrived at Port Jackson 10 March 1822. After a time in the famous Hyde Park Convict Barracks, he was assigned to a master at Windsor NSW, where he worked in an iron gang.

He had a life sentence; until recently we didn’t know what crime he committed, his record being one of those lost by fire in Ireland much later on. However, a few years ago came this information:

Jacob was convicted of horse stealing 1820 and there is a report in The Belfast News Letter of Friday the 4th Aug 1820, no. 8084; page 4, column 3. He was found guilty and was sentenced to hang but was sent to Australia…

For much more on the voyage of “Isabella 1” see Fascinated still by (family) history and here. 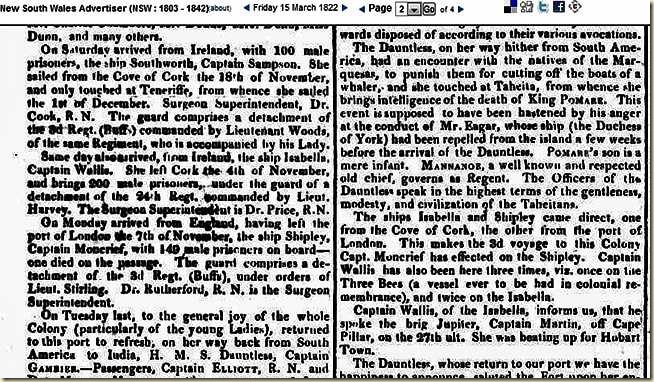 Now we approach 1825 when a most significant event in the history of my family occurred: the arrival of the immigrant ship “Thames”, departed Cork on 14 November 1825 reaching Sydney via Cape Horn on 11 April 1826. There was loss off life during that voyage, including members of the Whitfield family, not least, it seems, Mary (Gowrie), Jacob’s wife. In November 1823 Jacob had petitioned Governor Brisbane to have his wife and six children join him in the colony. For detail see my posts Tangible link to the convict ship “Isabella” and the immigrant ship “Thames” (2014), Stray stories of family and Australiana — 2 (2014), William and his tribe… (2014).

We saw last time how William Whitfield, my great-great-grandfather, and at least also his sister Mary (1808-1872), fetched up on the shores of Port Jackson in 1826. Mary married Daniel Sweeney, convict transported on the “Daphne” to Sydney in 1819, and they had three children.

Extract from the marriage record of Daniel Sweeney and Mary Whitfield at St Matthew’s Windsor. 15 January 1827.

My grandfather’s full name was Thomas Daniel Sweeney Whitfield – though he tended to deny it. See also Continuing my trawling through Trove and family history. William went on to sire quite a tribe with Caroline Philadelphia West. 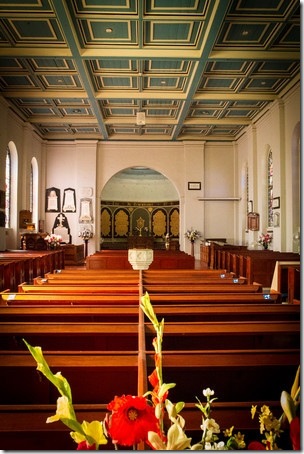 Designed by convict architect Francis Greenway, and built between 1817 and 1822. Beautiful building — photo by Scott Bird.