This is my branch of the Whitfields, and we have been fortunate in having a great family historian in Bob Starling. “Jacob Whitfield’s journey from Cootehill County Cavan Northern Ireland to the land down-under : embracing the Whitfield family history /​ by Robert Starling… Research relating to Jacob Whitfield (convict) transported from Ireland 1822. Jacob’s wife Mary and four children migrated on the ‘Thames’ in 1826. Mary and two children died on the voyage. William, the only son of Jacob to survive was responsible for the Whitfield name propagating to towns of Picton, Braidwood and the NSW South Coast.”…

One of the remaining mysteries about [William’s father] Jacob concerns his final years. On Trove I have tracked down the latest mention of him in a case where he wasn’t the defendant! 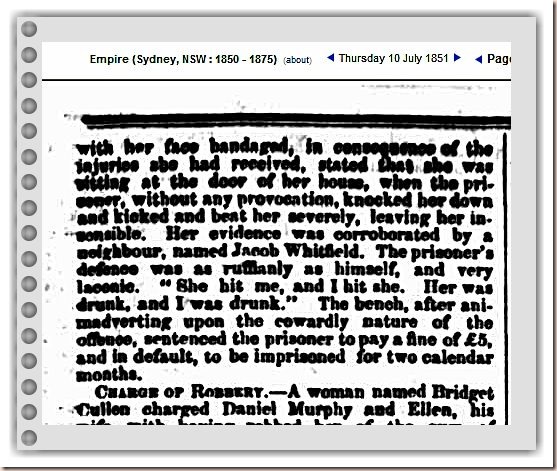 So Jacob remained in Market Lane until at least the second half of 1851. In a 2011 comment on “About the Whitfields: Convict Days” Bob Starling wrote:

For some years I have been searching for Jacob Whitfield’s death. It was noticed that Jacob gave his religion as a Quaker on one of his applications to marry. With this fact the Quaker society in Sydney has carried out some research and came up with the following piece of information:

“In searching the incomplete records we have of burials in the Friends Burial Ground within the old Devonshire Street (Sandhills) Cemetery, I came across a reference to:
“Burial Notes missing of … Jacob Whitfield” Unfortunately, there is no indication of his date of death or burial. Burials took place in the Friends Burial Ground from about 1837 through to about 1880.”

Whilst we can now accept that Jacob died in Sydney, probably between 1851 and 1856 we cannot quite put him to rest until we find an exact date.

He was certainly around for a long time.

Bit of a villain though, it seems. [I have since moderated my views on this.]

It turns out there is another Whitfield family altogether extant – and with Shire links.

The Whitfield family farmed in the Tyne Valley of Northumberland before moving to iron works on the Derwent River in Cumberland where two daughters drowned in separate accidents. Descendants experienced contrasting fates. One, James Whitfield made a fortune on the Australian goldfields before becoming a successful entrepreneur in Workington. His siblings lived and worked in industrial towns and the youngest, William Whitfield became a master mariner in Australia, experiencing a number of misfortunes before returning to Hull, Yorkshire, leaving his Australian family behind.

Now that is interesting, because my father used to say his Aunty Jessie and one other family member had traced the family to Hull, and there was allegedly a lost fortune there… That must be this family, but there is no doubt there is no close connection.  I suspect OUR Whitfields arrived in Ireland in the 17th century as part of the “plantations”.

And as for Jacob? Given the respectability his son William achieved I am beginning to think he was simply left behind when William and Caroline went south. Certainly he was erased from the family memory as I first encountered it in Picton in the 1950s with yet another William Whitfield – Dad’s Uncle Bill.

You will recall that we “found” Jacob, my convict ancestor, or we at least found the part of Sydney where he is known to have resided in the second half of the 1830s through early 1840s. By the 1860s the family had moved on – Braidwood, Picton… My grandfather was born in Picton in 1867. Him I remember. Just. He died in 1948. His brother William I remember more clearly, because he survived well into the 1950s. That William – son of William, the son of William, the son of Jacob – was still riding horses and ploughing his orchard almost to the year of his death. I remember his house, with its (to citified me) rather magic rural air, and tales of this one and that one, and timber getting, and horse breaking, and blacksmithing, and bullock teams… And Sao biscuits with tomato and cheese…

The tales never went back more than about one generation…

I think I can see why, for several reasons. Sometimes my father would mutter about the Old Testament curse on “the sins of the fathers”… Perhaps too, given what the area they had left behind in Surry Hills had become by 1900, you will see why it didn’t figure in the stories… Anyway, it was not part of my grandparents’ generation’s personal memories. They had become country people.