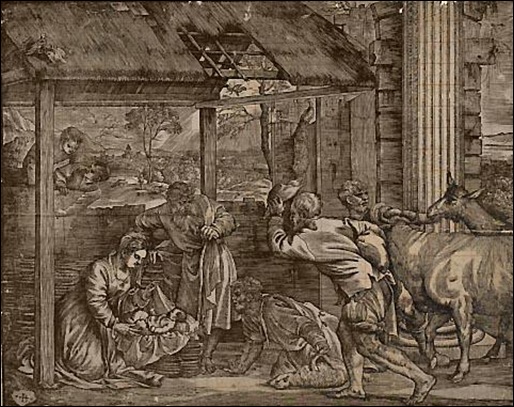 Seventeenth century near-contemporary of Shakespeare John Donne has managed to compact just about every bit of traditional doctrine on the Nativity into one sonnet!

Immensity cloistered in thy dear womb,
Now leaves His well-belov’d imprisonment,
There He hath made Himself to His intent
Weak enough, now into the world to come;
But O, for thee, for Him, hath the inn no room?
Yet lay Him in this stall, and from the Orient,
Stars and wise men will travel to prevent
The effect of Herod’s jealous general doom.
Seest thou, my soul, with thy faith’s eyes, how He
Which fills all place, yet none holds Him, doth lie?
Was not His pity towards thee wondrous high,
That would have need to be pitied by thee?
Kiss Him, and with Him into Egypt go,
With His kind mother, who partakes thy woe.

A bit of a triumph, but not the best poem Donne ever wrote. The scene is indeed one for “faith’s eyes” rather than the stricter gaze of the historian, but who would complain too much?