In Personal Reflections: Saturday Morning Musings – the art of Jiawei Shen this morning Jim Belshaw gives his account of an SBS documentary I missed last night, as I watched a DVD and then the Olympic Games. 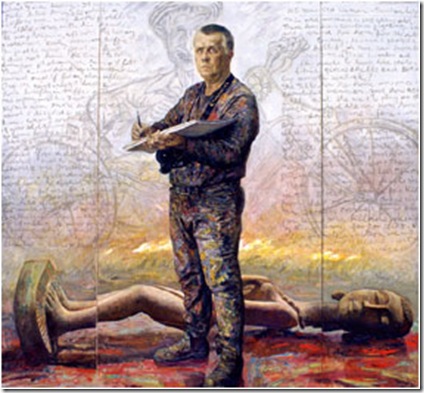 There are quite a few Chinese artists, and Chinese artists now in Australia, who have produced very interesting work over the past two decades. See for example Other histories: Guan Wei’s fable for a contemporary world. Here are some examples of Guan Wei’s work.

For more on Guan Wei see:

Guan Wei’s ancestors were part of the Manchu nobility in China in the mid-seventeenth century. ‘His great-grandfather was the Comptroller of the Yihe Yuan, the luxurious Summer Palace constructed for the Empress Dowager Cixi at the end of the last [nineteenth] century; his great-great-aunt was taken into the imperial family, and gave birth to Aisin Gioro Puyi, or simply Henry Puyi, also known as the Xuantong Emperor, the last imperial ruler of China.’¹ By the early twentieth century, this family had fallen out of power. Mirroring that strange chemical compound in Les vents, in which a form exists for a fleeting moment, the ebb and flow in the fortunes of Guan Wei’s Manchu family suggests an equal transience…

Guan Wei moved to Australia in 1990 after witnessing the tumultuous events of June 1989 in Beijing, China. His first visit to Australia was as an artist-in-residence at the Tasmanian School of Art. Since then, Guan Wei has been an artist-in-residence at the Museum of Contemporary Art in Sydney and at the Canberra School of Art, Australian National University.

His work has been included in several major exhibitions in Australia and internationally, most often as a significant painter who continues to make a contribution to the art that emerged from China post 1989…

Through the decade of the 1990s, Guan Wei’s work drew heavily on the cultural and geographical differences between China and Australia. To mark the tenth anniversary of the Tiananmen Square massacre in China, the Museum of Contemporary Art in Sydney organised an exhibition titled ‘Guan Wei: Nesting, or the Art of Idleness 1989-1999’. Guan Wei currently lives and works in Sydney.

He was awarded his Australian citizenship at the same ceremony as M received his.

The work in the previous entry was in the less avant-garde, more officially sanctioned, area of contemporary Chinese art.