Yes, The Shire! I spent the first 26 years of my life there. It seems a long way from Surry Hills…

Over there on the west of the map you see Sutherland itself. See how close the bush of Royal National Park comes. On the top right you will see how industry has ruined one of the most important parts of The Shire historically, Captain Cook’s landing place at Kurnell.

On the extreme west (or left) edge, most of that settled area has been developed since I left the Shire. The large river emptying into Botany Bay is the Shire’s northern border. You will see a smaller river joining it near the railway bridge in the top left-hand part of the map. That’s the Woronora, and in the years 1952-1955 and then in the mid 1960s I lived quite close to it.

Here’s what it’s like there. In that bush I somehow sensed its past; you couldn’t help but do so.

The original inhabitants of the Sutherland area were some clans of the Tharawal people. Archaeological work in the Sutherland Shire has revealed evidence for Aboriginal settlement dating back at least 8,500 years. Geologists tell us that the original coastline around Sydney has retreated about 20 km and that those flooded coastal plains may hold evidence showing occupation of this area going back well beyond the 8,500 years revealed in the 1966 Archaeological exploration.

Within the Royal National Park, field surveys have revealed many hundreds of Aboriginal rock shelters. In other locations (The Military Area near Holsworthy and Darkes Forrest) there are thousands of sites, camping areas and sacred places. These areas mentioned have not been affected greatly by European occupation and building and may give a clearer example for the quality of life and abundance of resources in Sutherland/Liverpool areas.

I didn’t know then that I was partly descended, so the story now goes, from the Tharawal or Dharawal myself… The top picture of the three below is linked to the very worthwhile project from which it comes. 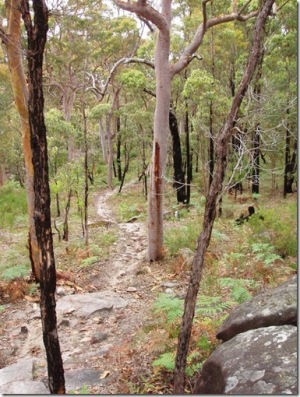 On the left is a track typical of some I used to go down as a kid, and on the right the spectacular Giant Spear of the Gymea Lily.